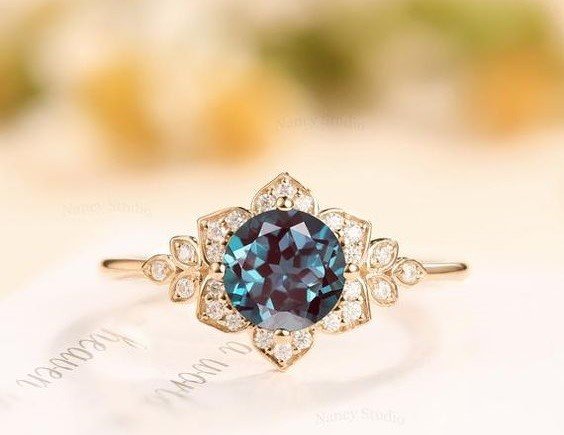 Alexandrite was originally found by a Finish mineralogist, i.e., Nils Gustaf. Upon finding the gemstone, he misidentified it as emerald. Later, upon further investigation, the unique attributes of the stone were revealed, and it acquired a new identity. It emerged as a new type of gemstone called Alexandrite.

The charming stone got named after Alexander II of the Russian Empire. But the name, as well as the popularity of this recently discovered stone, has little to do with the ruler himself. It’s more to do with its wondrous attributes and properties, which we’ll be checking out in this post. Let’s get to it!

#1. Alexandrite is the birthstone for June.

Pearl is the primary birthstone for June. Alexandrite is the secondary birthstone for June-borns. Although it’s not as popular, it’s still quite fortunate for people born in June. That’s because Alexandrite is associated with creativity, good fortune, and love. If handled appropriately, it can bring some positive impact on the life of the carrier.

Perhaps, it’s the fact that Alexandrite can change its colors under the light that makes it such a peculiarity. It can exhibit completely different colors under different light. At one moment, you could be seeing a bright green stone in your hands. But as soon as you change the light source, you’ll see that the stone turns into fiery red color.

The scientific term for this magical Alexandrite optical phenomenon is pleochroism. According to this, the presence of different minerals enables a stone or crystal to absorb light of different wavelengths and reflect respectively. Thus, changing colors.

An Alexandrite that exhibits visible and drastic pleochroism is the most valuable of them all.

#3. Alexandrite was the national stone of the Russian Empire.

Alexandrite shifts color from red to green. This property did not only appear magical to the people of the Russian Empire, but these colors were also relevant to the military of Old Imperial Russia. Owing to this, the alexandrite stone became the first national stone of tsarist Russia or the Russian empire.

#4. Alexandrite is more expensive than the most popular gemstones of all time.

Alexandrite may not be all-so-hyped-up, but the truth is: it is more expensive than the most reputable gemstones around. These gemstones may include sapphire, emerald, ruby, and even diamond!

About why it’s so expensive, read in the next fact!

#5. Alexandrite is found in only selective places.

When we say Alexandrite is rare. We mean it quite literally. You can acquire original and exquisite Alexandrite only from Russia and Brazil. Some deposits have been found in East Africa, Sri Lanka, Tanzania, Zimbabwe, Myanmar, and India. Even in these places, you cannot find a stone as good as that in Russia and Brazil. So, the stone’s practically rare.

There are only a few good varieties available. If you’re looking forward to getting an alexandrite jewel, you ought to remember, it’s on a first-come and first-serve basis.

#6. Alexandrite got its fame from Tiffany & Co.

Tiffany & Co is known for producing luxury and trendsetting wedding and engagement jewels. Back when Alexandrite got discovered for the first time, the authorities at Tiffany & Co went to Russia in search of this stone. They bought a reserve so large that it lasted for decades. And Tiffany & Co kept introducing Alexandrite jewels, including necklaces engagement rings, wedding rings, etc.

Today, you can get a quality Alexandrite engagement ring from elsewhere as well. It’s not only Tiffany & Co selling the best. Apart from stone quality, Tiffany & Co is still seen to be promising some unrivaled designs.

#7. Alexandrite is rarely enhanced or treated.

Most gemstones require heavy editing, or you can say, refining once they’re with the manufacturers. However, the case is the opposite when it comes to Alexandrite. These stones rarely require any treatment, which explains why they’re so expensive.

#8. Large Alexandrite stones are amongst the rarest.

The largest alexandrite stones weigh 66 carats and 141.92 carats. These are so rare that they are currently in museums! On the contrary, the largest black diamond mine was 555.55 carats. You can see the difference!

Summing up, Alexandrite is indeed a rare, unique, and surprising stone. Although everything about the stone has stunned us already, we know that this is not it. We still have to discover a lot more about this beauty!

An Introduction to Temperature-Controlled Trucking

Tech companies are getting into fashion, and how are they doing?

A Few Hacks to Extend the Life of Your Nail Polish