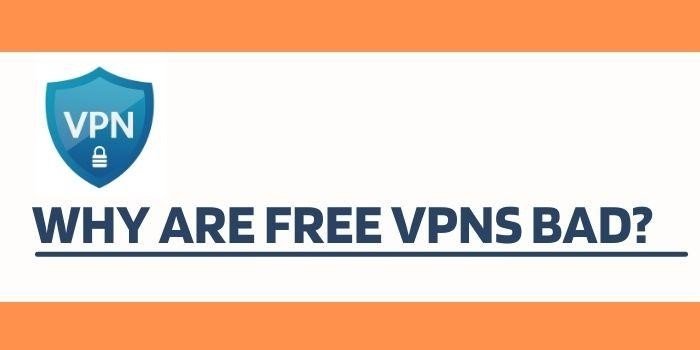 In this digital era, many people are still not aware of cybersecurity and this leads them to become victims of online fraud. In such scenarios, they compromise their important and confidential data along with financial details.

To prevent such online vulnerabilities, there are various tools are available and one of them is VPN. VPN is a great weapon against hackers & snoopers who always try to get access to your system to get away with some confidential data.

However, using a free VPN can also harm you in various ways but why free VPNs are bad? That we will know later in this article.

Before we know why you should not consider using a Free VPN talk about what actually is a VPN?

VPN is a technology that provides you with an anonymous identity to protect your privacy along with your data. It establishes a protected network while using the public network and makes it difficult for hackers and snoopers to track your activities as well as data.

Since you can find free and a paid VPN software on the internet, we won’t recommend you to get free VPN software for yourself. Considering the various reason for not using an unpaid VPN that we have outlined below, might make you cost more than the paid VPN programs. These reasons are:

The main aim of a VPN is to guard you against hackers but some unreliable and unsecured VPN programs contain malware. We have seen various cases where hackers create a copy with malicious codes of a high-demanding VPN software and offer them for free. Once the user installs such apps, the malware starts infecting the device.

The best VPN prevents data leakage including DNS as well as IP address leaks but in most cases, an unpaid VPN does exactly the opposite. Most free VPN software earns money by selling personal data of their users and that is one of the major reasons quite often data gets leaked by using unpaid VPN programs.

Free VPN usually boasts to unblocked the blocked content including Netflix, Prime Video, Hulu, etc. You can also get such a VPN while installing the best Kodi addon on your device. However, not everyone does what they promised. However, If you use the best VPN, You a bundle of globally equipped high-speed servers. You can connect any of offered servers to unblock various streaming platforms to watch your favorite movies and shows.

Almost all free VPN programs lack in providing reliable and solid security features to guard user’s privacy and data. That’s undoubtedly becoming the main reason for getting attacked by hackers and snoopers. Such illegal user trace down the user’s IP and gets access to their device and takes away confidential data.  that’s why free VPNs are Bad and we recommend using a paid version.

In terms of speed, you don’t get good speed with free VPN programs as the servers they use don’t configure to provide faster speed. You might face frequent buffering while watching videos or poor video quality.

What Are The Best Free VPN?

Despite not providing sufficient security features, there are some free VPN apps that work better than most unpaid VPN. Some of the best free VPNs are below outlined:

These are power handpicked best free VPN that you can use for multiple purposes.  however, you can choose their paid plan to get premium service along with industry-leading security features.

We hope now you are well aware of why free VPNs are bad. We also mentioned some of the major disadvantages of using a free VPN.

VPNs are meant to protect us from internet vulnerabilities and that’s the main aim of using them too. We would recommend you choose a free trial of a paid VPN software so you can check whether that particular software fulfills your requirements or not.

Why is it important to get apostille services?

How Much Does It Cost to Rent an Electric Bike?

Netwyman Blogs, The Best Blog To Read About Networking Breakthroughs in Technology

How Often Does Your Home Need a Deep Cleaning?